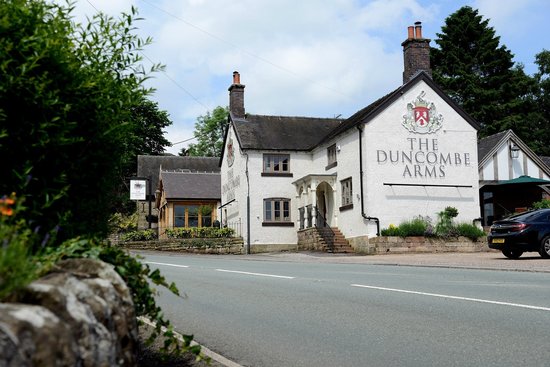 After the festive season, life had become a little dull so we decided to treat ourselves… and food is our guilty pleasure.

It was a cold and damp evening when we took the short drive into the country to the Duncombe Arms (shortlisted in the Great Food Club Awards 2015) on the Derbyshire/Staffordshire border, but it was worth it for the warm and friendly welcome we received. The bar was busy but not noisy and we were greeted by a gentleman, who we assumed to be the restaurant manager, who showed us into one of the dining rooms; the room would accommodate about 16 covers.

There was a large fireplace, the walls were deep red and there were lots of candles glowing, giving a warm and cosy atmosphere. Our waiter welcomed us, enquiring about our day, and provided us with the a la carte menu, specials board and wine list, then left us to make our choices. He asked if we would like water and offered the choice of bottled or tap. There was a good variety of wines on the list; unfortunately we were both driving so instead of a bottle we opted for a glass.

Whilst we were deciding, the waiter brought a fresh little loaf, already cut on a wooden serving board along with a pat of butter. The bread was warm and delicious with a hint of cheese.

The starters ranged from £5 – £9 and mains from £12 – £20, with a selection of optional extras priced around £3. It’s worth noting that the pub caters for children on both the lunch and evening menus.

For our starters we chose devilled mackerel, compressed cucumber, cucumber ketchup and scorched gem. And twice-baked Welsh rarebit with tomato chutney. Both were attractively presented with tastes to match.

My friend’s main was pan-fried fillet of stone bass, Bombay potato terrine, curried cauliflower, sauteed onion puree, baby spinach, almond and grape. The bass was a fresh, thick, milky white fillet with a crispy skin and the accompaniments were very tasty too.
I opted for Jerusalem artichoke, salsify and Hen of the Woods mushroom risotto. It was the first time I had eaten Hen of the Woods mushrooms and they were delicious – I would certainly have them again. I would go as far as to say it was the nicest risotto I have ever eaten.

Our waiter was very helpful, answering our various questions and even popping into the kitchen to check with the chef.

Although we could easily have stopped eating at this point, we are suckers for a dessert or two! We opted for stout cake with malted milk ice cream, caramelised banana and hazelnut, and Duncombe Arms rhubarb and tonka bean trifle with ginger crumb. The stout cake was a moist, stout-flavoured chocolate cake that was rich but balanced by the malted milk ice cream. The trifle was my only disappointment, as although the flavours were good, the consistency was a little too solid for my liking. However, we were impressed that the waiter picked up on this and asked if there was a problem with my dessert. He said he would take my comments back to the chef. (For anyone who would like to know, as we did, the tonka bean is a vanilla flavour substitute sometimes used in desserts).

We were offered coffee but couldn’t squeeze any more in! All in all we had a very enjoyable evening and we would recommend the Duncombe Arms and will certainly be returning soon.

By Kath Cowlishaw and Kay Frost