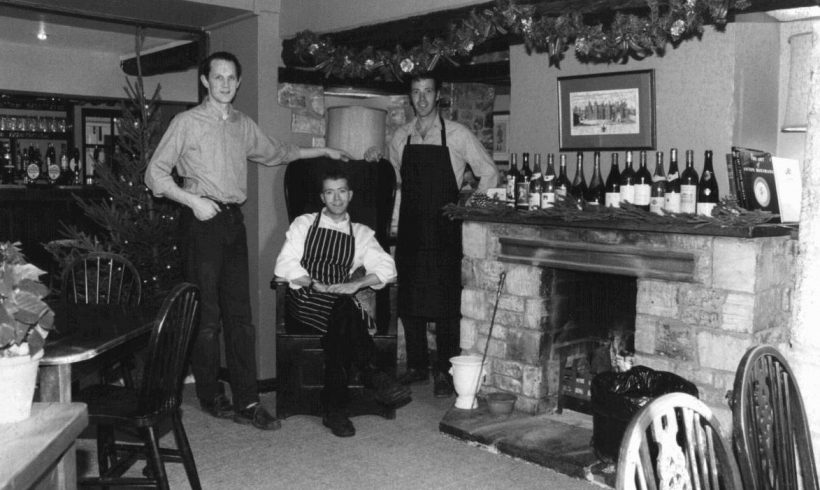 The Olive Branch in Rutland: The Story Continues

This year, The Olive Branch of Clipsham – one of the UK’s original gastropubs – celebrates its 20th birthday. The past 18 months have provided some of the toughest but most rewarding moments in its history.

The Olive Branch in Clipsham, Rutland, celebrates its 20th birthday later this year. The founding trio of Ben Jones, Sean Hope and Marcus Welford bought the pub in November 1999 when it was a closed village boozer. Today it is widely seen as one of the UK’s best gastropubs, although the past year and a half has been a roller-coaster ride.

But as any operator knows, this curtain of consistency hides a constant behind-the-scenes battle fought by a large team, all working their socks off to create the perfect pub experience. Ideally, customers and diners see the equivalent of a swan sailing serenely down a river, but beneath the water, feet are paddling furiously to achieve the grace and allure.

The past 18 months have required some particularly hard paddling at The Olive Branch. Staffing challenges, team changes and the growing issue of customer no-shows have conspired to give co-owner Ben Jones and the entire Olive Branch family plenty of battles to fight. Also, the team’s constant desire to improve and excel means they have put extra pressure on themselves.

Mid-2018, co-founder and co-owner Sean Hope – having had enough of the stresses and demands of a hot kitchen – decided to step back from his hands-on executive head chef role. Operating the stoves since 1999, often single-handedly, had taken its toll on Sean, and he made the change to maintain his sanity and regain his health.

When a business loses a figurehead, decision-maker and driving force, it’s never easy. But in this case, The Olive Branch lost the skills of a superb and experienced chef, too. Ben and the team worked hard to steady the ship and give Sean the breathing space he needed. And after six months, Ben decided to bring in a new head chef to lead the kitchen team. Following a long search, in October 2018 he recruited Nicholas Evans from Michelin-starred Northcote near Blackburn in Lancashire.

However, after a promising start, the move did not work out. Nick left The Olive Branch two weeks before Christmas 2018 and the pub was suddenly a head chef down at the busiest time of the year.

The Olive Branch machine went into overdrive. The team pulled together in adversity and drew on the goodwill and support of former team members while asking current staff to go above and beyond. “They responded magnificently,” says Ben. “I couldn’t have asked for more in the most testing of circumstances.”

The situation was challenging but provided a vital lesson: the strength of any business, especially a pub, comes from the whole team. No one person holds the key to success; there is no magic formula; there is no ‘golden spatula’. Rather, success and fulfilment come from many people – in this case, people with The Olive Branch in their blood! – working together to deliver the key aim: creating the perfect pub experience.

Friend and former colleague Chris Ansell had been assisting in the kitchen and preparing to help Ben and Sean open a cookery school. The school was put on hold and Chris agreed to step into the breach, using his experience and cool-headedness to steady the ship. Like Olive Branch co-founders Ben and Sean, Chris is a product of Hambleton Hall. Chris was sous chef at Hambleton 30 years ago when Sean and Ben completed their apprenticeships at the hotel. At the time, Chris’s boss was Nick Gill, brother of the late restaurant critic AA Gill. Chris later moved to The Ram Jam Inn and then to Langar Hall, where he became head chef.

It was clear that – with increased customer and staff demands – the job Sean had been doing was too big for one person. Therefore, Sean’s role was split in two and Chris took on management responsibilities, ably assisted by long-standing general manager Louise Williams. Louise is another team member who has influenced The Olive Branch’s direction over the past seven years. The hands-on chef’s role would need to be handled by a new team member, so Ben and Chris began the search for a talented and creative head chef.

After three months, Chris found a candidate with excellent leadership skills and appointed Luke Holland. Luke is now in charge of the kitchen’s day-to-day operation and creativity, working closely with Chris and Ben. Together, they ensure the dishes still have that distinctive Olive Branch feel, while also slowly evolving the pub’s cuisine.

And happily Sean still keeps his hand in. Three years ago he created and developed a pub allotment, polytunnel and henhouse, all located over the road from the pub. Sean now meets with Ben to discuss the development of the allotment and is still cooking at home, experimenting with curds and cheese, making vinegars, chutneys and preserves.

Marcus Welford, one of the founding trio, is also still involved. He left the business in 2012 to pursue his passion for wine but now assists with the pub’s wine list and helps to run some of The Olive Branch’s regular wine events.

So, as The Olive Branch heads towards its 20th birthday, the story of this remarkable pub continues. And although the period of 2018-19 has been a time of change and challenge, the turbulence has had little impact on the exterior of the business. Ben says: “We’re busy with both regular and new guests, which is a testament to the team’s hard work. Naturally, the changes are not to everyone’s taste but the level of criticism and appreciation remains pretty much the same as it has always been. And the most important thing is that the team are all happy and enjoying what they create.”

The excitement and joy of running a great pub have always been central to life at The Olive Branch. That’s what inspired the original founders and that’s what drives the team today.

Behind the scenes, the feet paddle ten to the dozen, but the swan sails gracefully on.

November 1999 – Hambleton Hall trainees Ben Jones and Sean Hope, with their friend, wine-seller Marcus Welford, buy The Olive Branch for £140,000. Their idea is to combine top quality food and a relaxed pub setting.

What’s in a name?

The Olive Branch was created from three farm labourers’ cottages and a cowshed in the second half of the 19th century. Before that, there was a village ale house near Clipsham Hall, but it was closed down by the lord of the manor, possibly because he got sick of his beered-up workers turning up late, or noise, or both. The closure caused an uproar, so the lord decided to convert three labourers’ cottages – located a suitable distance from his home – into a pub. It was named The Olive Branch because it was a peace offering to the village.