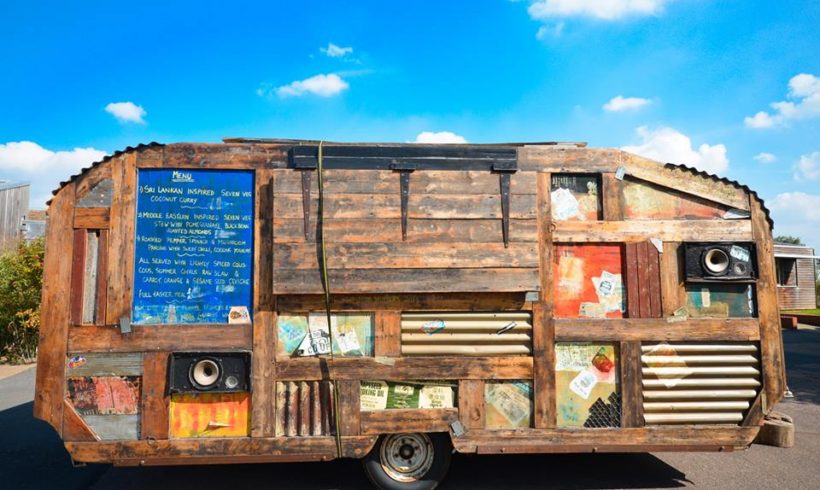 In the market towns and countryside you’ll find artisan producers, farmers and chefs who have literally taken to the streets to promote their wares.

A very familiar couple in Leamington are Flick and Barny, dishing up gourmet toasties from the hatch of their dark green ‘beast’ The Jabberwocky. They unleashed their ‘Manwich’ on unsuspecting diners back in 2013, which has been known to induce meat sweats and cheese comas and is still one of their best sellers. The monster snack contains cheddar, ham, bacon, pastrami, chorizo, mozzarella, half an onion, Monterey Jack cheese, a 4oz minute steak and some Pip’s Hot Sauce. 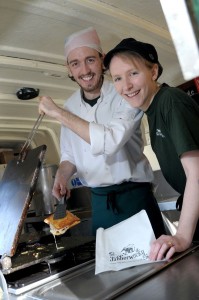 Flick and Barny from The Jabberwocky

Neighbours Fresh Rootz have lighter options, with the most colourful array of zingy salads and stir fries I’ve ever seen to tempt us to eat more vegetarian and vegan dishes. The BBC Good Food Show Best Street Food winners have trekked up to Leeds to spread the word on nutritious street food, gaining fans for their light pakoras and flavoursome curries.

With their fork-to-field ethos, William and Nell Morton rear pigs and sheep on their farm in Southam. They cook and sell dry-cured back bacon, streaky bacon, sausages, organic lamb burgers and horseshoe gammon steaks to customers at the Napton Village Store and from their mobile van The Red Banger . This cherry red 1965 converted Citroen H Van has already popped up in nearby Leamington Spa and will soon be on its way to Rugby, for the town’s first night-time street food market. 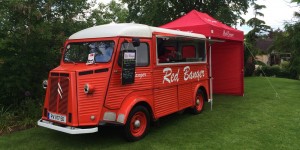 On Thursday March 5, a late-night shopping extravaganza launches. As well as retail therapy, visitors can enjoy wares from a selection of traders from the Scoff Street Food collective. The spicy aroma of paella, noodles and curries will waft over Jubilee Gardens in the independent quarter of town. Carefully selected, local, award-winning traders, including The Hungry Toad and Big Daddies Diner will be serving up their hot snacks to Rugby’s hungry shoppers from 5–8pm.

If you can’t wait until then for your next street-food feast, the next Warwick University Farmers’ Market is on Wednesday February 11 and Eat Street returns to Regent Court in Leamington on Friday March 6.

Warwickshire is showing that it is not just at the much-lauded Kings HEATh Street-Food Market and Digbeth Dining Club where you can savour fantastic street food!