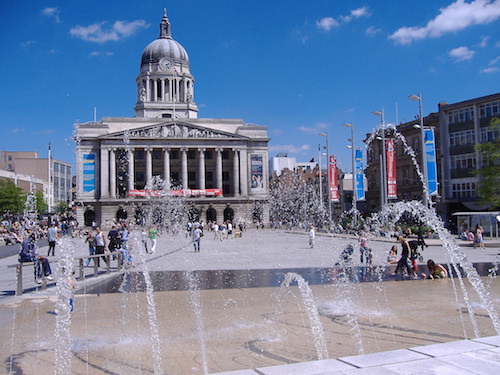 As we move closer to summer (though I wouldn’t be surprised if it’s raining while you read this), I’ve seen a number of al fresco diners and drinkers embracing the Great British Weather. It got me thinking about the best spots in Nottingham to eat and drink outside. I thought I’d share a few with you.

1) Fothergills
The area alongside the castle and Robin Hood statue is pretty, particularly when the sun is shining. I recently had a Mediterranean plate of cured meats, bread, and a pint of beer from a local brewery here that was rather satisfactory.

2) Angel Row
One of the most bustling areas in the summer is the collection of establishments on this street, just a stone’s throw from Market Square. The food options range from the excellent north African of Marrakesh to the Latin influences of Las Iguanas. The bars are popular too, with Sinatra’s wine bar being a favourite of mine.

3) Riverbank
In good weather people tend to gravitate toward water. We may be miles from a beach, but the Trent is the next best thing. The sun coming down over the river, with a gin and tonic in hand, makes for a pretty nice evening in my book. 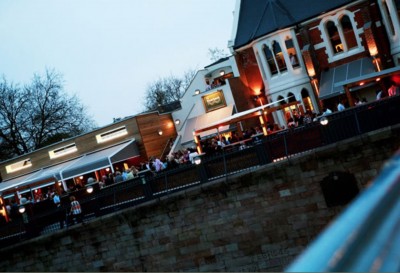 The terrace at Riverbank

4) Market Square
When the concrete slabs of the square are bathed in light you really get the urge to eat among the fountains. The new American burger spot, Five Guys, and the ever-present Shakeaway would be my favourites to grab a bite. You can bet they will be doing a roaring trade.

5) The Canalhouse
I suppose you could call this a beer garden, but maybe a beer jetty is most apt. The canal side in the city centre has a few seating areas at different venues, but my favourite is here among the hanging baskets.

6) The Vic in Beeston
Popular amongst locals and students alike, the canopy provides some welcome shade while maintaining the al fresco approach. I had a great Mediterranean meal here last year – the gambas pil pil somehow tasted even better on The Vic’s terrace.

7) Jamie’s Italian
I tend not to be an advocate of the chain restaurants, but hidden at the back of this Low Pavement site lies a bit of a gem. The walled garden is a sun trap and there aren’t many better locations to enjoy a simple bowl of pasta and glass of wine.