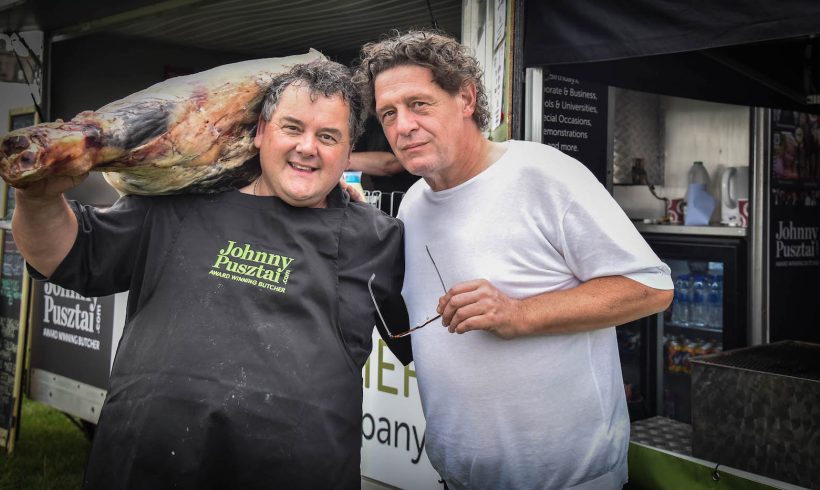 “Well, I am going to have breakfast with a Master Butcher and then meet his pigs.”

That was kind of how my day with the award-winning Johnny Pusztai, the Master Butcher of Nottingham’s Mansfield Road, started. You know how sometimes you come across a place and you think “how come I never knew how amazing this was?” That was how I felt when I stepped inside the unprepossessing J.T. Beedham’s (Johnny’s butcher’s shop) on a damp January morning. Beedham’s, (a Great Food Club member, of course) has been selling quality meats on the Mansfield Road in Sherwood since 1884, and the small shopfront nestled between cafes, pubs, healthfood shops and delis is the front for an Aladdin’s cave of butchery, smoking, curing and drying that makes the most of all the nooks, crannies, cellars and yard of this turn-of-the-century building. You need to visit somewhere like Beedham’s to remind yourself what real butchers were like when there was one on every High Street and to experience the passion and expertise of a man who knows, and loves, his meat.

When you meet Johnny you realise straight away that this is no ordinary butcher and no ordinary butcher’s shop. There must be more than 30 varieties of sausage in the window, from Jamaican Curry to Beef & Ale, the Hungarian-inspired Magyar with paprika and peppers, lamb and mint and a venison Robin Hood special, as well has your traditional pork and Cumberland swirls. Above the fridge hang rows and rows of salami and cured meats. 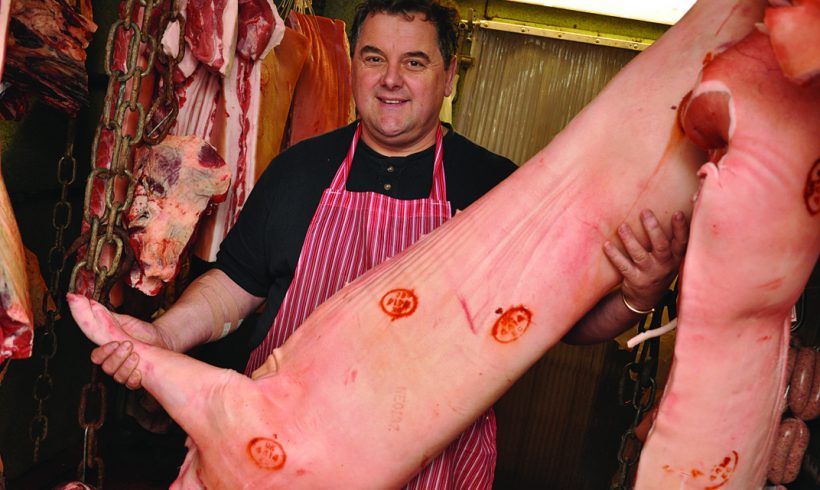 In the back yard lives Johnny’s improvised and home-made smoker, in the cellar the locally sourced meat is salted and dried to be later cured over oak chippings. The smells are astonishing, and you feel that if you stand still too long, you might just find yourself in a salt bath before being hooked up with the racks of ribs, chickens, beef and duck. His team tell me they’ll come and find me if I’m not back upstairs in 10 minutes…

Over a superb breakfast at the Black Bull in Blidworth (I had the full English, of course, which included Johnny’s bacon, sausage and astonishingly good black pudding, while he settled for the lighter smoked salmon), Johnny tells me that his father Dezso came over to the UK in 1956 after the Hungarian uprising and settled in Sherwood. Johnny started at Beedham’s when he was just 12, as a Saturday boy delivering orders on a traditional butcher’s bike. When he left school he took an apprenticeship there. He left to work in a slaughterhouse for a time, which enabled him to raise the cash to buy the business when George Beedham retired. Johnny is determined to preserve the values and ethos of that business and he’s now at the helm and doing what he does best – meat.

Johnny’s business reached another level when Michelin-starred chef Sat Bains discovered his smoked ham. From there, foodies, food writers, celebrity chefs, newspapers and television suddenly took a keen interest in his products and in 2011 Johnny won the Observer Food Monthly Producer of the Year award. The business goes from strength to strength, with Johnny in demand for food festivals countrywide performing food demos, cooking and selling his amazing burgers and, I suspect, generally enjoying himself. He has cooked alongside the likes of Tom Kerridge, Marco Pierre White and John Torode and now has great plans for the future.

After breakfast we pay a visit to a farm just up the road in north Nottinghamshire where Johnny sources all his pork and lamb. Careering over the field in five-inch deep mud to meet his pigs was a highlight and I was pleased my breakfast had had chance to settle. As they ran to greet us, snorting enthusiastically and splattered with wet mud (and with apologies to any vegetarians), I couldn’t help but visualise the rows of pig ribs hanging in Johnny’s cellar and think “if they only knew…” Still, they are having a fab time of it first.

Back at the shop Johnny shares his plans for the future, which include a range of cookery classes where you can spend an evening with the Master Butcher himself learning to make your own sausages and burgers or cure your own meat. He also intends to expand his outside barbecue and catering services.

And finally, he plans to open a restaurant next door to the shop. Yep, you heard it here first, Nottingham’s lively restaurant scene is going to get better. Using all his own meats and charcuterie, Johnny wants to convert the building next door to the shop into his own chophouse-style restaurant and meat emporium. There is nowhere else in Nottinghamshire that does what Johnny does and if he can bring the same personality, skill and passion to his restaurant as he does to his butchery, you can be sure The Snobby Butcher will have meat lovers queuing down the Mansfield Road.

I had a fantastic day with the generous and gregarious Mr Pusztai and he sent me home with some of the best charcuterie and bacon I have had in a long time. If you wondered if real, old fashioned butchers still exist, let me tell you, they do.