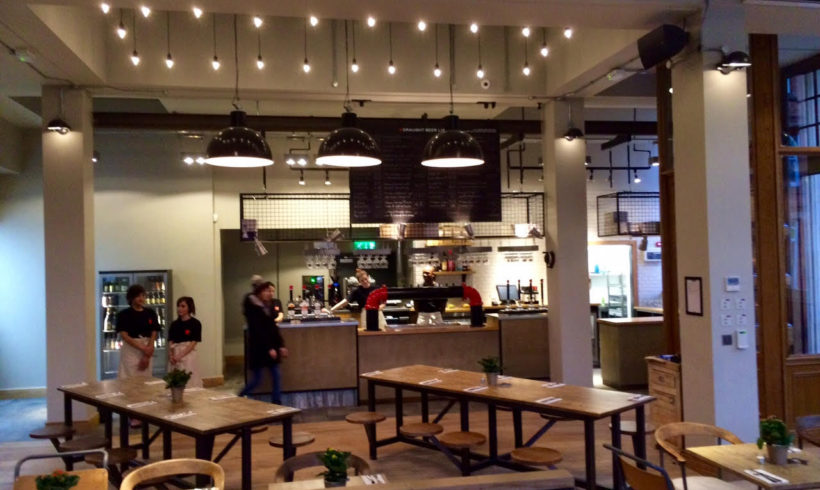 Nottingham’s bar and restaurant scene just seems to be going from strength to strength at the moment. One of the latest additions is the Purecraft Bar & Kitchen on St Peter’s Gate, in the city centre. It is the second Purecraft in the Midlands, the other being in Birmingham (which won Best West Mids Pub or Restaurant in our 2015 GFC Awards), and is located in a former HSBC Bank building, a rather elegant stone property occupying an imposing corner plot, opposite St Peter’s Church. It is currently the only food and drink venue on this bit of the street so it will be interesting to see if this presents a challenge or if the offer is strong enough to pull the evening crowds to this part of city. On first impressions, I suspect the latter. 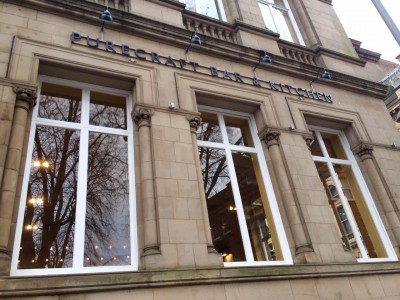 We went along to a “soft opening” evening in March before the formal opening and I have to say we were pretty impressed. Purecraft offers a comprehensive range of craft beers, served from a huge open bar beneath a suspended behemoth of a menu blackboard, listing around 20 different beers. 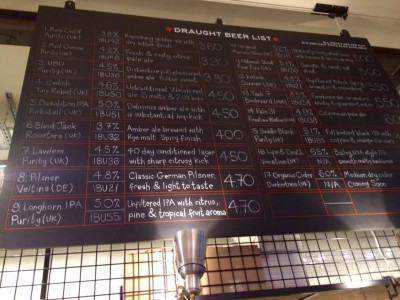 The project has clearly had some serious money invested in it: the interior is light and airy with a slightly softer take on the rather ubiquitous distressed wood and industrial fittings style. It feels spacious and welcoming, and pretty cool – probably not quite what I had expected from a craft beer bar, but it’s always nice to have your stereotypes challenged. 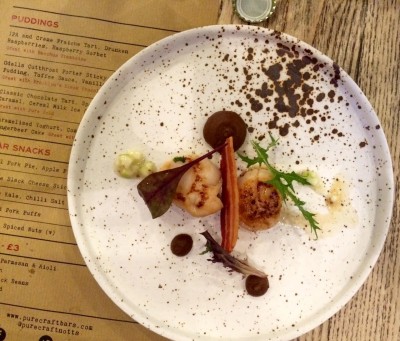 Interestingly, and bit surprisingly, the food seems to have received as much thought as the beer – this is not just a drinking venue for trendy hipsters (although it is that too). I am always a bit wary when bars claim to serve “great food with a twist” but this one actually does… the menu is original and distinctive, featuring lots of local produce and imaginative use of the beers as ingredients. The large plates all come with a recommended paired beer – very welcome for those who, like me, are craft beer virgins. 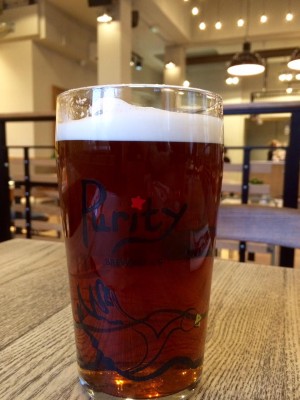 Soft openings are always a bit of risk, of course, as the staff and the kitchen are still finding their feet. Our complementary beers were served with small tasting samples from the menu. The staff were friendly and efficient, and I am sure their knowledge of the extensive beer menu will improve over the next few weeks (for people like me who know nothing about craft beer except what I like). 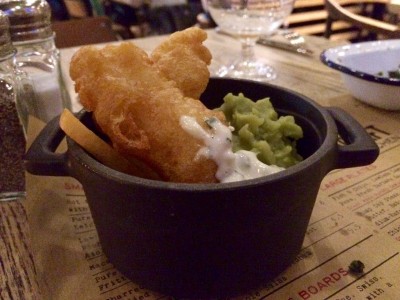 Our tasting menu included some of the best bar snacks I have ever eaten (not exaggerating here): crispy kale with chilli salt and roasted spiced nuts, both delicious and perfect for keeping your thirst levels up…

The BBQ sauce with oatmeal stout on the hot & spicy chipolatas was exceptional, the Lawless Lager battered fish (for a traditional fish, chips and mushy peas) was light, crispy, hot and melt-in-the-mouth, and the rump cap steak with beer butter and baby watercress was cooked perfectly, as was the braised lamb shoulder. 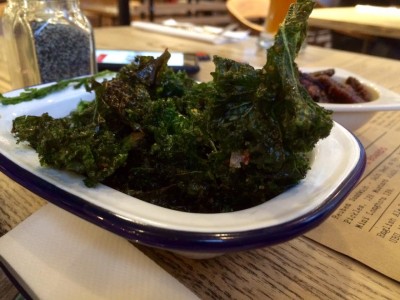 If I were to be picky, I am not sure the “triple cooked chips” on the menu were actually served on the night; these were more of the oven baked French fries variety; the quality of the chipolatas didn’t quite match the fabulous sauce; the mushy peas were a little hard; and a couple of the accompaniments were cold when they reached us, but then this is the point of soft openings – to test things out, so all is forgiven.

The highlight of the food was definitely the scallops “small plate”, served with burnt apple, local bacon and apple salsa. Beautifully cooked with exceptional flavours, I could have eaten that several times over. 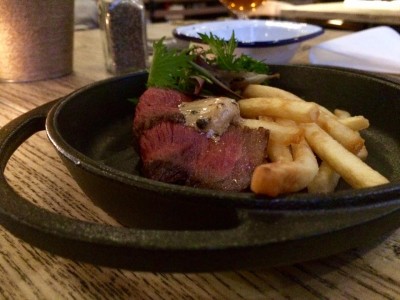 As I said, I am not a craft beer connoisseur, we tried the Gold, the delightful Mad Goose and UBU and enjoyed them all, but I can’t claim to share the finer points with you. I will say, though, that Purecraft is a pretty cool offering and I may have discovered a nascent passion for craft beers. We’ll definitely be back.