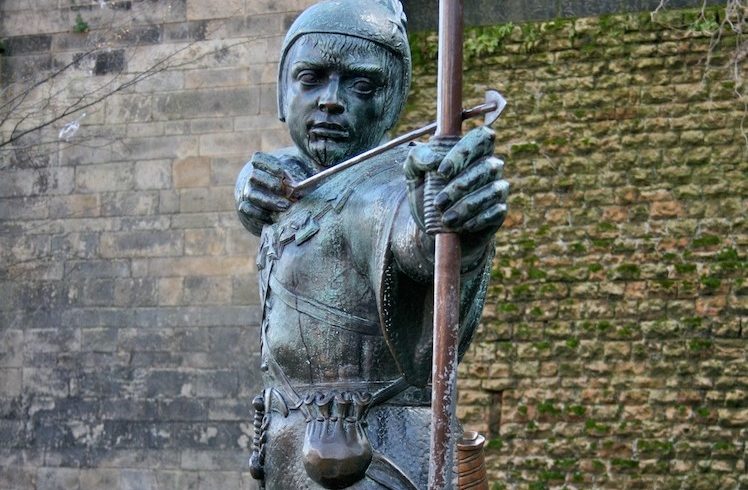 What you need to know about Nottingham’s restaurant scene

As this is my first piece (of many I hope) for Great Food Club, I thought I would cover some of the more interesting culinary developments from Nottingham over the last 12 months. I suppose, though, I should introduce myself first. Great Food Club’s founding editor Matt Wright kindly approached me having seen my blog, Frusher on Food. I’ve been reviewing restaurants in Nottingham for the last 18 months, having lived in the city for eight years now. I’d certainly encourage you to share your views, feedback and recommendations with me on that platform. 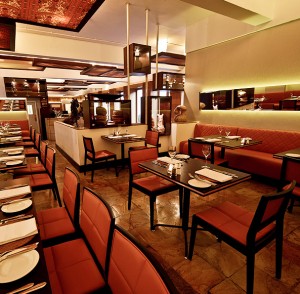 2014 was a great year for the Nottingham restaurant scene. Old favourites remained to do their thing: World Service and Hart’s [10% off Monday to Friday with your Great Food Club membership card – Ed] are still going strong. I am delighted to say the number of new independent openings across the city has really made me excited about what we have to offer. We have much greater diversity too, supported no doubt by a continually burgeoning student population. 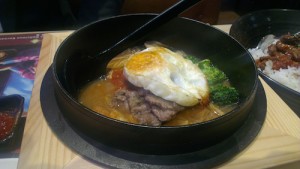 There are a few categories of restaurants I would like to mention:

Korean – two restaurants have opened in close proximity: Pan-Asia BBQ and Miss Korea. Korean food was relatively new to me but I have become a kimchi convert. Fermented cabbage is the national food of Korea and is used in many different ways in their cooking.

American/Smokehouse – the man vs food craze appears to have hit our shores with Jim’s and Rub smokehouses opening in the last months of the year. We will also return in 2015 to Red’s True BBQ, a small chain that has seen significant success in Manchester and Leeds. Jim’s has been met with a mixed reception so it will be interesting to see if Nottingham can accommodate three similar restaurants. 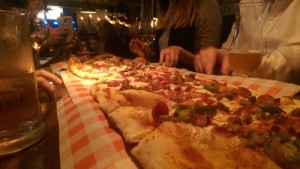 A metre-long pizza at Oscar & Rosie’s

Pizza – Nottingham still strives for a great independent Italian restaurant in the city centre but a number of pizza parlours have sprung up. Pilot, Poultry & Prosecco focuses its attentions on both chicken and pizza in stylish surroundings in Hockley. Suede Bar is similarly located but is a smaller outfit with a two-at-a-time policy for its stone oven. Sarah, who contributes to my site, was suitably impressed on her visit; it’s also the place with the most out there toppings! I was recently impressed with Oscar and Rosie’s [another Great Food Club venue running an exclusive member offer – Ed]: the restaurant is situated in Das Kino, the German cinema/table tennis bar (don’t ask). If you are with a party you can order metre long pizza which with some great topics makes for top value and taste. 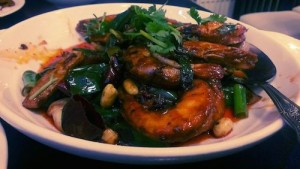 Szechuan – a previously under-represented cuisine in Nottingham, the standard Cantonese cuisine being much more prevalent. Temple of Heaven opened in the site of Bar de Nada and, dubious name aside, I had an enjoyable meal there with the very affable staff. Another restaurant in the same genre which has seen significant publicity over the last 12 months is Shanghai Shanghai. It was featured in both The Times and The Telegraph with fawning words in both publications. Taking notice of such august opinion I gave it a go for myself and broadly agreed. You need to be adventurous to get the most from these restaurants as there a lot of boney items and ingredients you won’t find at your local takeaway!
I look forward to what 2015 has to offer us.