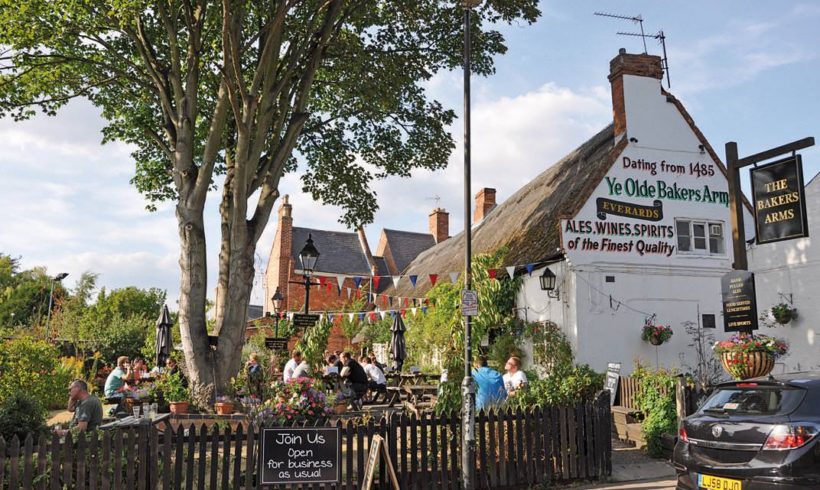 The thatched Baker’s Arms is believed to date back to 1485, the year Richard III died on Bosworth field. It was originally part of a row of properties constructed to house workers who built Blaby church, and later in its long life became an ale house. The pub also contains Blaby’s old village bakehouse, so can justifiably claim to be one of the most historical pubs in the region.

The characterful interior of the Baker’s Arms reflects its age: it feels ancient, with low beamed ceilings, exposed brickwork, stone fireplaces and plenty of cosy nooks and crannies. This all combines to create a pleasant atmosphere. Outside there is a fine beer garden.

Today ‘The Baker’s’, which is owned by Leicestershire’s Everards Brewery, has gained a good reputation for its local sourcing policy. “We call the Baker’s an artisan pub,” says licensee Chris Smart, “which to us means working very closely with good local tradespeople, whether they’re food and drink producers or other suppliers. We put that approach at the heart of everything we do.”

The Baker’s Arms’ ‘Artisan Menu’ has been devised to “bring the talents of the local community together with food”. Wherever possible, every ingredient for every dish is produced or supplied by a person who lives locally, whether it’s honey from a local bee-keeper, fresh bread from the village baker or meat from a local farmer.

Take, for example, the braised shoulder and roasted loin of lamb with fondant potatoes, curly kale and baby honey-roasted carrots. The lamb is sourced from family butcher Flackies of Blaby, which buys from local farms, while the vegetables are from Whetstone Pastures Farm.

As well as the Artisan Menu, there is a good selection of homemade pies, plus a variety of lighter lunchtime bites. The Baker’s also hosts bread-making classes.