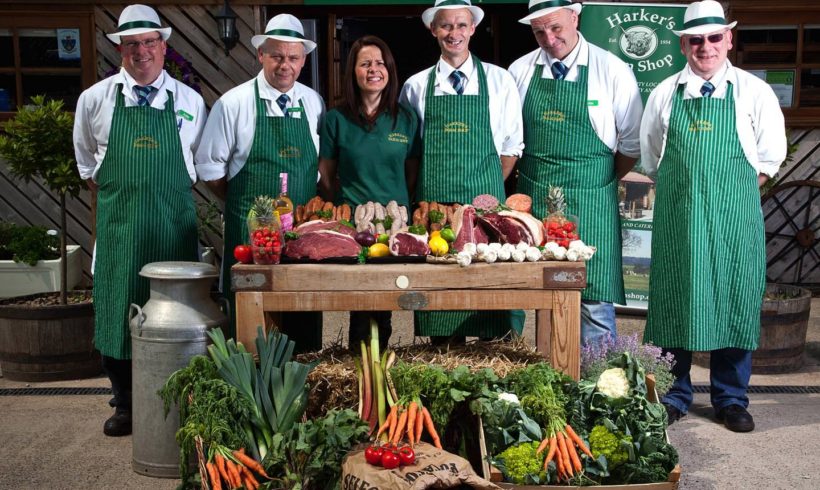 Harker’s Farm Shop on Blackberry Farm in south Nottinghamshire was established in 1954 and has been run by the same family ever since.

Situated on a working farm where animal welfare is paramount, the shop is well known among top quality Midlands restaurants and in-the-know food lovers for its exceptional butchery counter, which sells meat from animals raised in the surrounding fields. Before being showcased in the farm shop, Harker’s beef is hung on the bone to mature for up to 28 days.

Harker’s Farm Shop also sells Harkers farm shop also sells their own home-reared lambs plus a variety of poultry – turkey, duck, goose and guinea fowl, much of it raised on the farm. There are 150 varieties of handmade sausages on offer too, including gluten-free options, plus 30 types of homemade burger, and a good selection of locally grown fruit and vegetables.

“We are proud to sell our own reared meat,” says farmer Rupert Harker. “We employ the highest standards of traditional stockmanship, treating animals with respect. The cattle are free to roam on our own land as far as the weather permits. During the winter months, when stabled inside, they are fed on natural foods including hay, silage and a cereal diet. No added hormones, additives or growth promoters are used.”

Harker’s has been part of the Red Tractor Assurance Scheme – an organisation that strictly monitors food safety and animal welfare issues – since 1996. The farm is also a member of the English Beef and Lamb Executive.

Harker’s Farm Shop also offers breathtaking views and has a field-viewing area where customers can see the farm’s donkeys, cattle, sheep, lambs, geese, ducks and smaller pets such as rabbits and guinea pigs. There is also a children’s play area.